We love to paint miniatures! 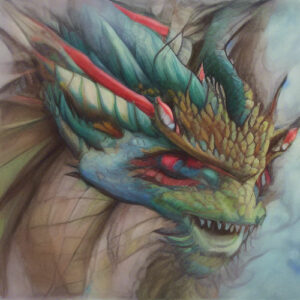 DragonPainter was born in the mountains of South Wales during lockdown 2020. To cheer me up, my brother sent me a Reaper Bones Learn to Paint kit. I loved it.

I wanted more minis to paint, but didn't know where to start. If only there was another kit? Thus DragonPainter was born.

Dragons have a long association with tabletop gaming and miniatures, the dragon is also a symbol of Wales. Do you know how the dragon came to be on our flag?

The Celtic King Vortigern was attempting to build a fort. He found the finest craftsmen in all the land and paid them handsomely for their endeavours. Every day the labourers would toil and every night their work was destroyed.

The desperate King consulted mages and witches but to no avail. Eventually, the boy Merlin was brought to his notice. Merlin told Vortigern that the site he had chosen for his mighty castle was directly above an underground lake where two dragons lay sleeping.

Vortigern set his men to dig deeper into the foundations, where they found that Merlin was right. The Red Dragon and the White Dragon were engaged in mortal combat. The Red Dragon emerged victorious and became a symbol of Wales.

Of course, this is all a myth. However, an excavation of the site at Dinas Emrys (Merlin's Fort) in 1945 revealed evidence of an underground lake and fortress from Vortigern's time....

A curated box containing everything you need to paint a miniature,

delivered to your door every month!